Music and dance fill the Lackland Performing Arts Center as the Centenary Stage Company announces its exciting 2018 – 19 full season line up of events. In addition to CSC’s professional theatrical productions, the 2018 – 19 season will see the return of the January Thaw Music Festival alongside a plethora of new concerts and dance performances. 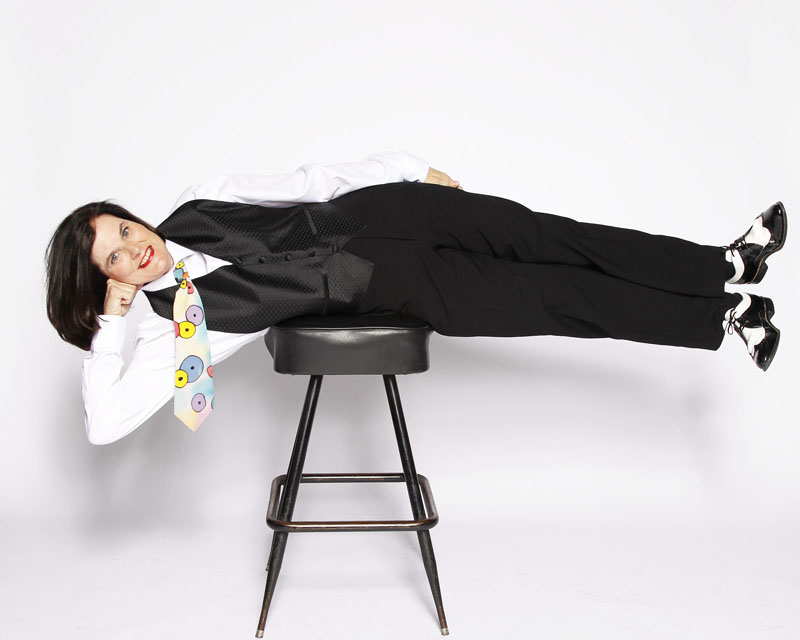 The 2018 – 19 season kicks off with Centenary Stage Company’s annual, celebratory “Curtain Up!”  gala on Saturday, September 15 at 8pm in the Sitnik Theatre of the Lackland Performing Arts Center. This year’s “Curtain Up!”  headliner will feature comedian Paula Poundstone, popular panelist of  the #1 rated NPR show “Wait Wait… Don’t Tell Me!” With smart, observational humor and a legendary spontaneous interaction with the crowd, Paula Poundstone is one of our country’s pre-eminent comedians. She improvises with a crowd like a Jazz musician, swinging in unexpected directions without a plan, without a net. Over the years Paula has amassed a list of awards and accolades. A star of several HBO specials and her own series, “The Paula Poundstone Show” on HBO and ABC, she was the first woman, in its then 73rd year, to perform standup comedy at the White House Correspondents’ Dinner. In addition Paula was a special correspondent for The Tonight Show with Jay Leno, for the Democratic and Republican conventions, the Inauguration and the Emmy Awards.

Paula is recognized on Comedy Central’s list of ‘The 100 Best Standup Comics of All Time,’ she won an American Comedy Award for Best Female Standup Comic, and she is included in innumerable lists, documentaries and literary compendiums noting influential standup comedians of our time. Paula is also an Author.  She just released her second book, the critically acclaimed, The Totally Unscientific Study Of The Search For Human Happiness (Algonquin Books). The book landed at #1 on Amazon Best Sellers lists in humor in Hardcover, Audible and CD. The audio book, read by Poundstone, is one of five finalists for Audio Book of the Year.

On Sunday, September 30 at 2pm in the Sitnik Theatre of the Lackland Performing Arts Center Centenary Stage Company presents theNew Jersey Symphony Orchestra Chamber Ensemble: Una Festa Musicale Italiana. Audiences will take a musical tour through sunny Italy, brought to life by a string ensemble from the New Jersey Symphony Orchestra! Featuring everything from traditional tarantella dances to the legendary music by Puccini, Mascagni and Rossini, this program showcase the best and brightest of baroque, Classical, and Romantic Italian music.

Centenary Stage Company’s ever popular January Thaw Music Festival returns to the Lackland Performing Arts Center for the 2018 – 19 season with an exciting line-up of musical guests.

Launching the January Thaw Music Festival is Michael Davis and the New Wonders on Saturday, January 12 at 8pm in the Sitnik Theatre of the Lackland Performing Arts Center. The Wall Street Journal has called a twenty-six year old Mike Davis an “eloquent trumpet prodigy”. His playing is imbued with the sounds of prohibition-era speakeasies, Hoovervilles of the depression, and glittering jazz palaces of the swing era, creating a timeless cocktail of American music. This is classic jazz from the 1920s and 30s, authentically performed by a New York group inspired by Bix Beiderbecke, Red Nichols, and the California Ramblers.

Finally, the January Thaw Music Festival closes with Michael Cleveland and Flamekeeper on Saturday, January 26 at 8pm in the Lackland Performing Arts Center. Considered one of the premier bluegrass fiddlers of his generation, Mike picked up a fiddle at age four, and his talent was recognized early. In 1993 he was chosen to be part of the Bluegrass Youth All Stars at the IBMA’s award show. Later that year Mike made his Grand Ole Opry debut as a guest of Alison Krauss. His list of guest appearances over the years is a who’s who of bluegrass legends including Bill Monroe, Jim and Jesse, Ralph Stanley, Mac Wiseman, Doc Watson, Larry Sparks, Doyle Lawson, and J.D. Crowe. At the 2001 IBMA awards, Mike took his first Fiddle Player of the Year award, and shared the title of Entertainer of the Year with Rhonda Vincent and the Rage. Together with his band Flamekeeper, Cleveland delivers some of the most powerful, exciting and authentic bluegrass you can find!

Music events continue at Centenary Stage Company as the 2018 – 19 season continues in the Lackland Performing Arts Center with the unique sound of the Martha Redbone Roots Project on Saturday, February 9 at 8pm. Miss Redbone’s music flows equally from her own unique, award-winning blend of Native American elements with funk and her deep roots in Appalachian folk and Piedmont blues she gathered on her journey from Clinch Mountain, Virginia to Harlan County, Kentucky and beyond to Brooklyn’s Dodge City-esque mean streets..

Just in time for St. Patrick’s Day, Reflections: Ireland in Song and Story, come to CSC on Sunday, March 10 at 3pm. Reflections is a tapestry of Irish song, story and cultural lore exploring the themes of religions, emigration, the Troubles and more. Irish tenor Tim Smith takes us on a journey ranging from Moore to Yeats to modern musicians and storytellers with music, stories, and laughter.

On Saturday, March 16 at 3pm the US Army Field Band: The Jazz Ambassadors present a free concert in the Sitnik Theatre. The Jazz Ambassadors is the United States Army’s premier big band. This 19-member ensemble, formed in 1969, has received great acclaim both at home and abroad performing America’s original art form, jazz. As the premier touring musical representative for the United States Army, this internationally-acclaimed organization travels thousands of miles each year presenting a variety of music to enthusiastic audiences throughout the nation and abroad. Their diverse repertoire includes big band swing, bebop, Latin, contemporary jazz, standards, popular tunes, Dixieland, vocals, and patriotic selections.

Featuring one of Broadway’s biggest stars of stage and screen, Introducing: John Lloyd Young, closes out CSC concert line-up on Friday, April 6 at 8pm. Tony Award winner John Lloyd Young originated the role of Frankie Valli in Broadway’s Tony Award winning Best Musical and international hit, Jersey Boys.  As Valli, Young garnered unprecedented accolades from New York and national media, including one of the most the most exciting New York Times reviews ever written for an actor making a Broadway debut. Mr. Young went on to win the Lead Actor Tony, Drama Desk, Outer Critics Circle and Theatre World Awards, becoming the only American actor in history to win all four leading actor awards for a Broadway debut. Young re-created his award-winning Broadway turn onscreen for director Clint Eastwood in Warner Brothers’ film adaptation of Jersey Boys, which premiered across the world in 2014.

Introducing: John Lloyd Young is a celebration of classic hits from the ’50s and ’60s presented in the authentic acoustic style of original rock ‘n’ roll, Doo-Wop and R&B standards. Along with tracks from Young’s critically acclaimed debut album “My Turn” the show features; “Sherry”, “Can’t Take My Eyes Off of You”, “Hold Me, Thrill Me, Kiss Me”, “In the Still of the Night” along with treasures by Roy Orbison, The Temptations, Carole King, Dusty Springfield, Al Green and Little Anthony.

The New Jersey Ballet returns to the Lackland Performing Arts Center for an exciting weekend of Dance. On Saturday, November 3 at 8pm in the Sitnik Theatre the New Jersey Ballet presents an evening of romance, sword fighting, and witches with Romeo & Juliet and Macbeth. Based on Shakespeare’s tragic masterpiece, Romeo & Juliet tells the tale of young lovers torn apart by family rivalries. Critics have called this ballet “a striking one-act classic” and “a gem.” NJB dancers will also perform excerpts from Shakespeare’s towering tragedy, Macbeth, based on the version by Vladimir Vasiliev with music by Kirill Mochanov. An expanded staging of Shakespeare’s great tragedy. More scenes. More characters. More dancing. And witches.

Then on Sunday, November 4 at 2pm the New Jersey Ballet continues the weekend to present their family favorite Sleeping Beauty in the Sitnik Theatre. This production is the full-length classical ballet that has drawn people to ballet for more than 100 years. Sleeping Beauty delivers high drama, tender romance, spectacular dancing and glorious Tchaikovsky music. The stage is filled with familiar characters including Princess Aurora, the Handsome Prince, the King and Queen and their splendid Royal Court, as well as characters from the fairy realm including the Lilac Fairy, the wicked Carabosse, Puss in Boots, Red Riding Hood, the Blue Bird and the Enchanted Princess. New Jersey Ballet’s troupe of international artists brings the story to life with elaborate pantomime and glorious dancing in a magical fairytale castle, with phantasmagorical costumes straight out of an old storybook illustration.

On Saturday, March 23 at 8pm, Darrah Carr Dance presents Ceilidh: An Evening of Irish Music and Dance in the Sitnik Theatre of the Lackland Performing Arts Center. Since 1998, the Bessie Award nominated company Darrah Carr has brought a bold new twist to conventional Irish dance.  Artistic Director Darrah Carr has also created a sensational and unique blend of traditional Irish step and contemporary modern dance she calls ModERIN: a playful combination of the words modern (dance) and ERIN (an Irish American reference to Ireland) This mixed repertoire program of traditional Irish music and dance include featured cast members Billy Elliot star Trent Kowalik and longtime Riverdance cast member Timothy Kochka. The programs have a live music component and feature champion Irish sTep dancers who have garnered awards at numerous competitions on both the national and international circuit.

The 2018 – 19 dance events conclude with MOE-TION Dance Theatre on Saturday, April 23 at 8pm in the Sitnik Theatre of the Lackland Performing Arts Center. Established in 2007, moe-tion dance theater is a contemporary modern dance company based in New Jersey. Under the artistic direction of Maureen Glennon, the company is dedicated to experimenting and creating new forms of expression. The company enjoys collaborating together, creating new work that speaks to each one of the dancers. Maureen is honored to have a company of dancers who are dedicated, creative, funny, inspiring and willing to do anything that she asks! moe-tion dance theater, known for their diverse repertory and site-specific work, has performed at numerous festivals, showcases and venues throughout the tri-state area.

The Centenary Stage Company 2018 – 19 season of events are now available for purchase to Season Producers and Flex Pass holders only. Season Producer package offers patrons admission into 16 events during the CSC 2018 – 19 season (excluding NJYCB Nutcracker). Benefits of becoming a Season Producer include: advance season renewal with preferred seating selection, no restrictions on date/time of performance selection, discounted tickets and no order, exchange or mailing fees.  Season Producer package is $250 for single patron and $400 for two patrons. Centenary Stage Company also offers a variety of Flex Pass options: Pick 6 (Any 6 events) for $150 per patron, Theatre Pass (4 Equity Theatre Events) for $100.00 per patron, Take 3 (Any 3 events) for $85.00 per patron. CSC’s Flex Pass options exclude the Curtain Up! gala, Nutcracker. Flex Passes provide patrons with discount ticket prices and the convenience of purchasing tickets at any time for each event.

CSC Season Producer and Flex Pass options can be purchased by mail, phone, fax or by stopping by the CSC Box Office as early as June 25, 2018. Tickets will be available for purchase to the general public July 8, 2018. Individual ticket buyers can now PICK THEIR OWN SEATS on the CSC online ticketing system.

For more information regarding any of the 2018 – 19 series of events visit centenarystageco.org or call the CSC box office by phone at (908) 979 – 0900. The Centenary Stage Company box office is located in the Lackland Performing Arts Center at 715 Grand Ave. Hackettstown, NJ in residency on the campus of Centenary University. The box office is open Monday through Friday from 1 – 5pm and two hours prior to every event. Centenary Stage Company can also be found across social media platforms; Facebook, Instagram & Twitter. Like and follow to receive the latest in CSC news and special offers.